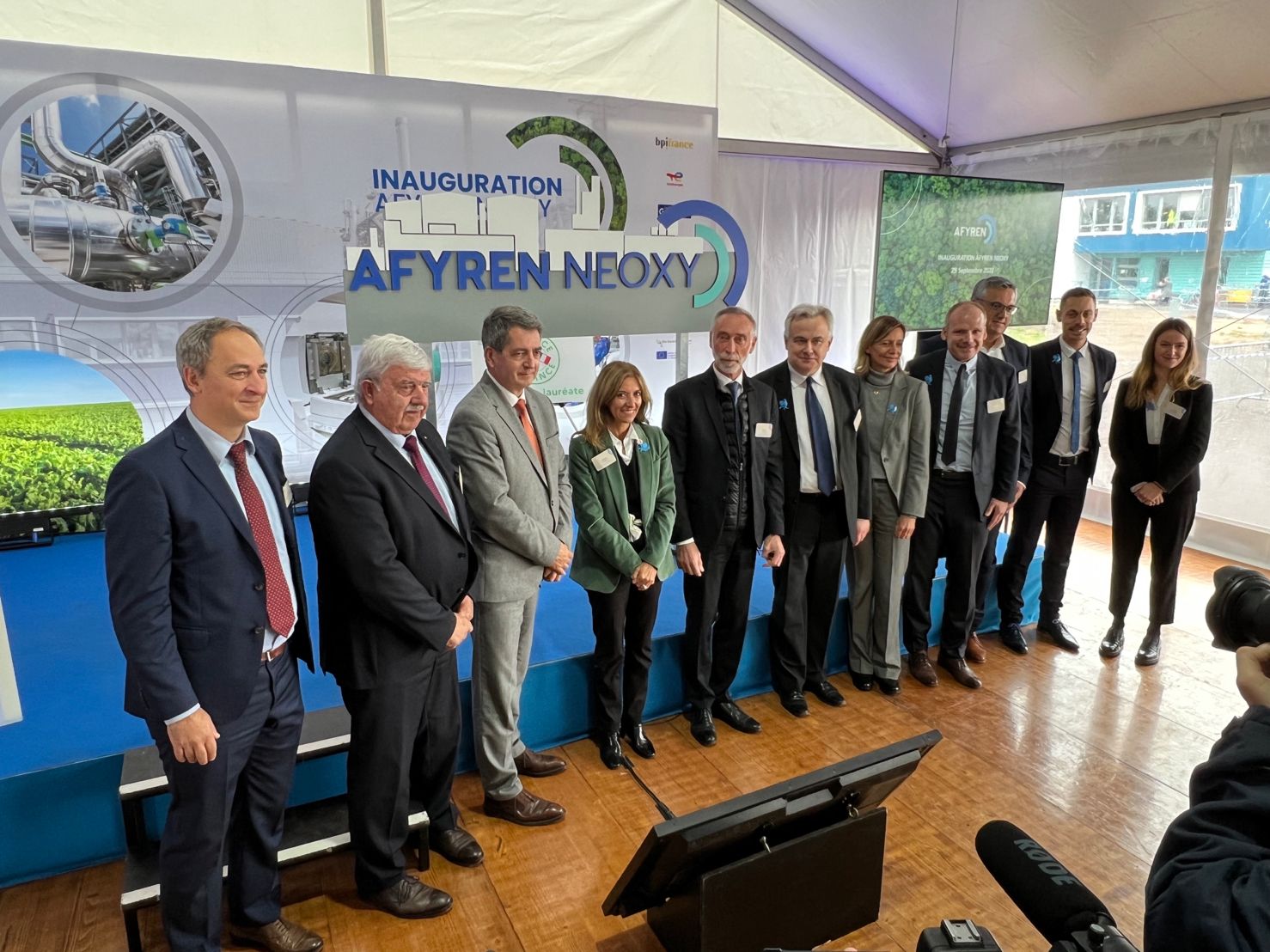 September 29, 2022 at 08:00 CEST – AFYREN and the AFTER-BIOCHEM project partners inaugurate the opening of the large-scale plant, AFYREN NEOXY, in Carling Saint-Avold (Grand Est, Moselle) on the Chemesis industrial platform. An audience of around 200 people gathered for this celebration.

Nicolas SORDET, CEO and co-founder of AFYREN: “The inauguration of this first industrial unit on time and on budget, despite the health crisis, is a reminder and a tribute to all the efforts made to keep to the schedule we had set ourselves. On behalf of AFYREN, I would also like to thank all our partners who, having supported our project, have enabled us to meet our growth objectives”.

Despite the global health crisis, the construction of the plant, which began in the second half of 2020, was completed on time and in good safety conditions. Numerous technical partners (engineering, equipment, software solutions, etc.) were mobilized for this project, representing more than 200,000 person-hours worked and bringing the number of people present simultaneously on the site to more than 150 at the height of the project.

All together, it took 20 months for AFYREN NEOXY to open its doors on September 29, 2022, after all the major milestones were reached: obtaining the operating license, construction of the plant, installation of the first equipment, g and the gradual industrial commissioning of the various units.

At full capacity, AFYREN NEOXY will produce 7 biobased carboxylic acids (16,000 tons) and a potassium rich fertilizer, with an annual saving of 30,000 tons of CO2 per year.

With its different product lines, AFYREN is positioned to serve 6 key sectors: food, feed, flavors and fragrances, lubricants, materials sciences and life sciences, offering bio-based solutions adapted to each target market.
AFYREN NEOXY meets an industrial achievement that allows the creation of 60 direct jobs, 200 indirect, and which contributes to the emergence of the bioeconomy sector.

A FORMATIVE EUROPEAN AND GLOBAL BIOECONOMY

The international scope of this industrial project is illustrated by the support of the European Union for the AFTER-BIOCHEM project. AFYREN brought together in April 2020, 12 key bioeconomy players around AFTER-BIOCHEM, an innovative European project aimed at developing a flagship biorefinery in Europe. AFYREN benefits from significant support from the European Union via the Bio-based Industries Joint Undertaking (BBI JU), which has awarded it a grant of almost 20 million euros out of an estimated total cost of 33 million euros to conduct the AFTER-BIOCHEM project.

AFTER-BIOCHEM, scheduled to last until May 2024, has already made good progress. Driven by the active collaboration of all its stakeholders, the project has made it possible to build new sustainable value chains that have finally led to the marketing of the 7 acids produced by AFYREN. The official opening of the AFYREN NEOXY plant represents a very important step.

Nicoló Giacomuzzi-Moore, Executive Director ad interim at CBE JU:
“The AFTERBIOCHEM project is a great example of the innovative bio-based industry we are already deploying in Europe: circular, sustainable, and competitive. Proving that we can substitute non-renewable fossil fuels with biological resources to produce organic acids for multiple applications is even more important given the current international context. Additionally, as one of the flagship projects funded by CBE JU, it shows how the bio-based sector is a viable path for industrial development in rural areas. By locating the biorefineries near the fields where the resources are generated, new green jobs are created in the countryside while diversifying the income of the current farmers.”

AFTER-BIOCHEM will enable AFYREN to validate an innovative, sustainable and replicable biorefinery model to contribute to the renewal of the industry and, more broadly, to develop a strong bioeconomy sector in Europe. The organisation put in place during the development and construction of the first AFYREN NEOXY unit must be deployed in order to prepare the following plants, by replicating a model of local and accessible raw material supply. Anticipating high demand for its biobased acids, AFYREN is already planning the construction of two additional plants by 2027.
This replication should be simplified thanks to AFYREN NEOXY’s efforts to set up an IT architecture, a management system and, more globally, a culture of operational excellence, that can be transposed to the next plants.

Nicolas Sordet, CEO and co-founder of AFYREN : “From the very beginning, the objective was to create a first plant whose model could be quickly replicated. We want to deploy other units according to the “Build and Operate” logic. Our R&D platform and our industrial and commercial team will be key elements in the next stages of our expansion.”