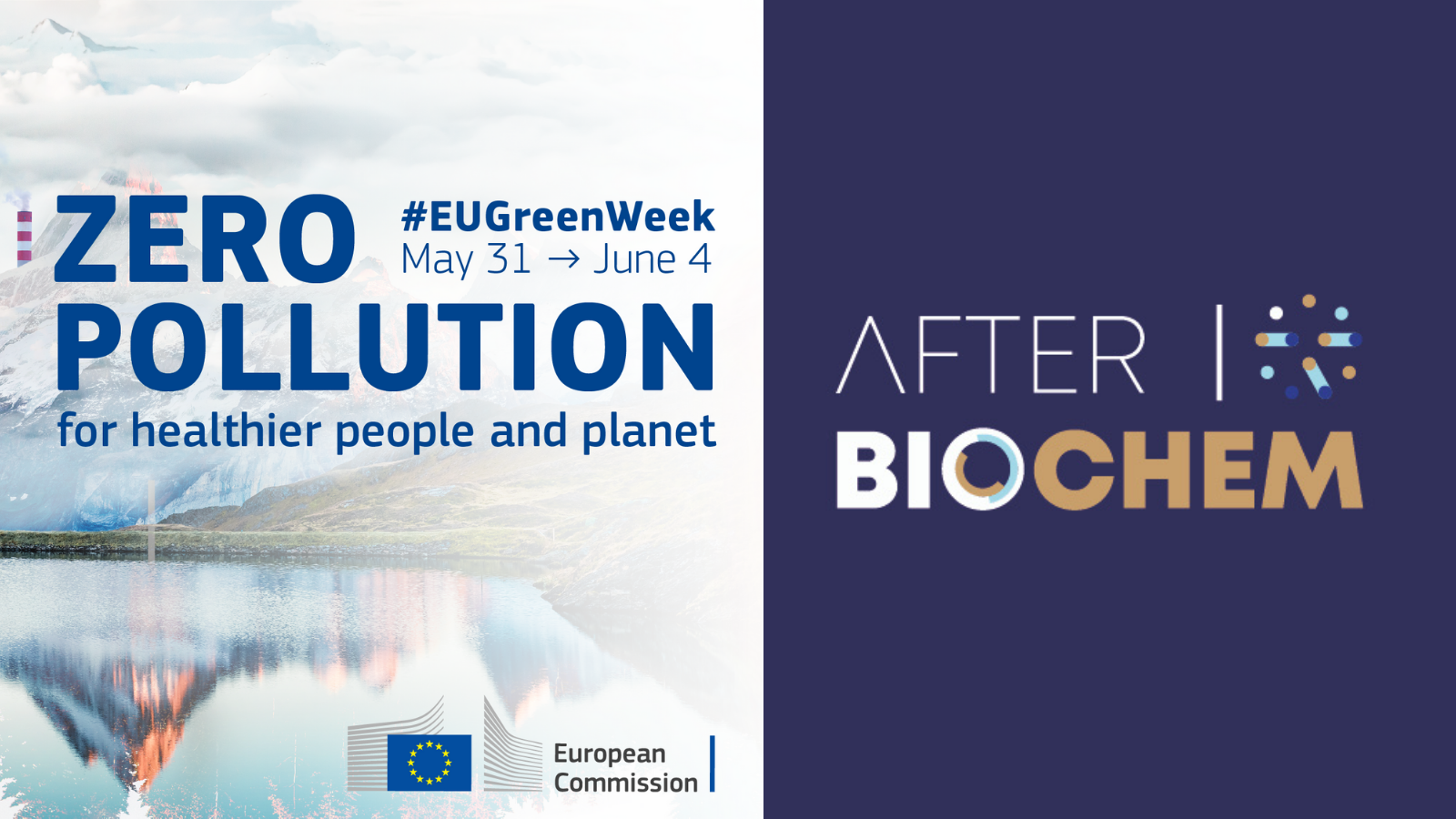 The EU Green Week is one of the main European events dedicated to environmental policy, which occurs yearly. In 2021, the priority was given to “Zero pollution for healthier people and planet. In that context, from May 31 to June 4, 2021, various virtual events – including the Opening Event in Lahti (Finland), four days of conferences and several virtual stands hosted by prestigious groups and institutions – were organised. The following article describes how the AFTER-BIOCHEM project and its associated public-private partnership, the BBI-JU program, contribute to Zero Pollution Ambitions.

This year, the European Green week  focused on the ‘zero pollution ambition’. It was articulated around the EU Action Plan toward a Zero Pollution Ambition. Other relevant European Green Deal initiatives were also discussed, such as climate initiatives, the upcoming Chemicals Strategy, as well as initiatives in the fields of energy, industry, mobility, agriculture, fisheries, health and biodiversity. During the whole week, discussions focused on the role of EU policies in moving towards a toxic-free environment across the EU while creating jobs and sustainable growth. Topics such as better monitoring and reporting, prevention and remediation of pollution from the air, water, soil, and consumer products were raised.

AFTER-BIOCHEM is an interesting example of how bio-based industry is helping to replace non-renewable fossil resources with “waste” and accelerate the chemical industry transition to circularity. The project core technology is based on 10 years of R&D at Afyren. The technology can turn regional agricultural by-products into high added-value and natural products using its all-in-one cutting edge fermentation process based on natural micro-organisms (100% GMO-free process and products). The project implements a “zero waste” strategy based on an optimised production process; all the fermentation outputs are valorised into valuable products: seven organic acids and one mineral co-product used as ingredients, and a fertiliser. The biobased and natural compounds will have applications in various markets such as food and feed, fragrances and flavor, personal care, pharmaceuticals, and industrial chemicals.

AFTER-BIOCHEM strategy confirms to be in line with the EU’s zero pollution ambition through its “zero waste” strategy resulting in a production process free of industrial process waste and directly avoid the releases of substances hazardous to the environment and health. It will have several other environmental impacts. Indeed, its integrated approach foresees a reduction of the carbon footprint by 81%, compared to traditional fossil-based organic acid production, according to an evaluation conducted by the partner Sphera.

Following the significant impact of the current BBI-JU, its founding partners, the EU and the Bio-based Industry Consortium (BIC), have developed an even more ambitious plan: the Circular Bio-based Europe Joint Undertaking (CBE JU). This new partnership will foster collaboration between the scientific community and industry for 2021-207 and contribute to the EU’s climate objectives in line with the European Green Pact.

The CBE-JU, which builds on the milestones of the BBI-JU, will aim to actively support the deployment of biorefineries in Europe and reinforce its environmental protection objectives, including biodiversity. To fulfil that ambition, the program will continue to involve all stakeholders, notably primary producers and strengthen its demands towards future projects to define and implement relevant environmental and socioeconomic indicators.

Take a watch at “The 2030 EU Biodiversity Strategy”